This or That! Fun-Based Research Writing

This or That! Fun-Based Research Writing
By:  Angela Bunyi 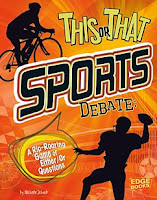 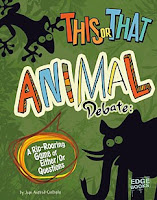 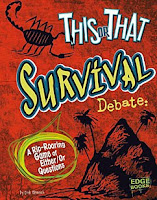 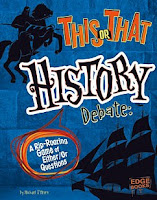 This or That Edge Book Series Summary:

Would you choose … to fall into quicksand or through thin ice? You must pick one or the other! Test your decision-making skills with these nail-biting survival questions. Then try them on your friends! -Capstone

Evidence-based writing is a foundational skill threaded throughout the Common Core standards. Regardless of your state’s adaption or modification of the standards, this evidence-based writing lesson is an important skill that requires researching, comparing/contrasting, providing opinions and evidence, and- just as important- plenty of time to talk and write about what we read. These books are a perfect way to achieve these goals while having fun and being engaged.
As stated by the series summary, each book is filled with questions to pose to your students in a “Would You Rather” format.  For example, would you rather cross a river with piranhas or would you rather cross a river with caimans? These books are highly engaging and have quite the variety on topics. Start by projecting the two pages on the Smartboard while you read it to the classroom, without discussion or modeled thinking.  In this example, piranhas versus caimans was used with a second grade classroom. 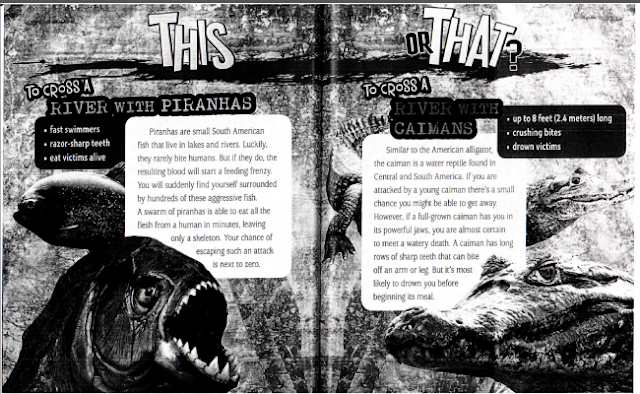 As with any new or important skill, it is best to model the process of evidence-based writing for the class together in a natural, authentic way. Consequently, as the passage is read a second time, underline words and phrases that would provide evidence as to who you’d rather swim with (this is modeling using evidence from the text), all while talking through your ideas as you read and take notes. This would be a good time to model and introduce the use of symbols. Using the research to back up your personal opinions, you can use checkmarks for “good” points (or stars, hearts, etc.) and X’s for the “bad” points. Upon completion of the second read, count up the “good” vs. the “bad” to see where this debate should go. The talk might sound something like this:
Okay as I read through the piranhas’ side, I first see that they rarely bite humans.  And it says here that if you are attacked by a piranha, you would be eaten in minutes, which could be a good thing because it won’t last that long.  Although your chances of escaping an attack are zero.  Those aren’t good chances.  Let’s look at the Caiman side.  Oh it says here that there’s a small chance you may be able to get away!  Hmm, but if it does attack you, you’ll lose an arm and a leg, if you don’t drown first.  Well that doesn’t sound very good because it seems like it would be a slower attack than the piranha.  Let’s add up the bad and the worse points on each side with a checkmark or an X.  So on the piranha side, I have two checkmarks because it rarely bites humans and the attack is fast.  On the Caiman side, I only have one checkmark because I may get away, but it’s only a small chance.  So I suppose if I had to choose, I’d choose to cross a piranha filled river. 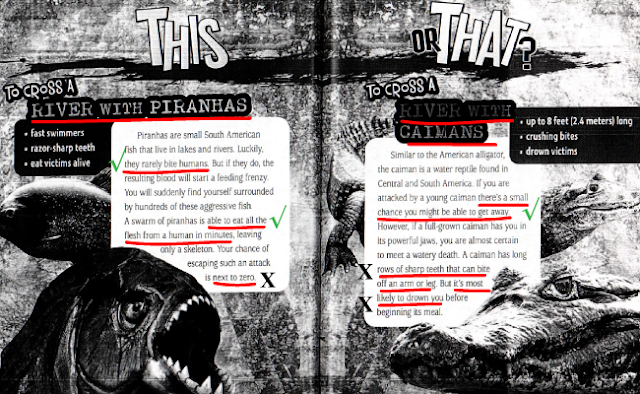 Next, tell your students that you are going to model how to take all those opinions and evidence to write about it. This could be overwhelming for our youngest, autistic, and/or struggling writers, so it is recommended that you provide and model a formula to start the process. The one I created and used goes like this and should be written on an anchor chart for display and reference:
State which choice you’d rather choose


Opinion statement tying in or expanding based on evidence


Evidence from the text #2


Opinion statement tying in or expanding based on evidence

Whether you are completing this writing unit with second graders or fifth and sixth graders, your students will be excited about sharing what they've learned with evidence to back up their opinions!

Angela's complete unit can be found on Teachers Pay Teachers.

About the Author:
Angela Bunyi is a first grade teacher at Discovery School in Murfreesboro, TN. She enjoys bursts of healthy eating and working out, reading in her sunroom, and petting her cat, Mochi.  #shemightbeacrazycatlady 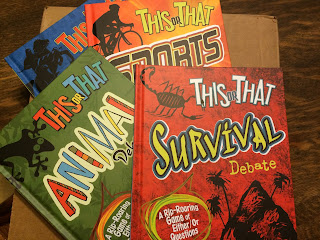