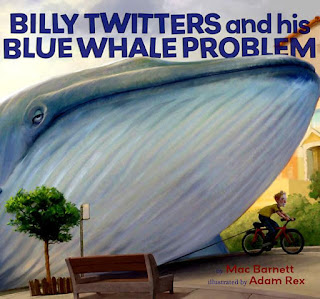 Summary from School Library Journal
Kindergarten-Grade 4—Billy Twitters's parents don't mess around when doling out punishments. When the boy fails to clean his room, brush his teeth, and finish his baked peas, they buy him a blue whale. It arrives via FedUp (motto: "Delivering Punishment Worldwide"), and it's up to Billy to take care of it. Rex's goofy illustrations blend the realistic with the fantastic, as in a giant wordless spread of Billy pedaling furiously on his bike, towing the whale behind on a skateboard as the beast's bulk takes out telephone poles and traffic lights. At school, things don't improve; a teacher gives a whale lecture instead of showing a promised cowboy movie, and Billy is uninvited from a pool party when the hostess learns he would have to bring the cetacean. And he soon finds that gathering thousands of krill for its dinner is tough work. At last, after cleaning out the whale's stinky mouth, Billy decides that it's a pretty peaceful place, and he decides to move in. That's a strange ending for an odd story, but young readers will likely enjoy the ridiculous premise, and the many whale facts worked seamlessly into the tale.—Kathleen Kelly MacMillan, Carroll County Public Library, MD

This book, by far, is the best read-aloud I've shared with my students this school year.  Mac Barnett seamlessly ties fun facts about blue whales into this absurd story about a young boy being given a blue whale to learn responsibility.  After reading the story together, explain to your students that there is a secret under the dust jacket of the book: 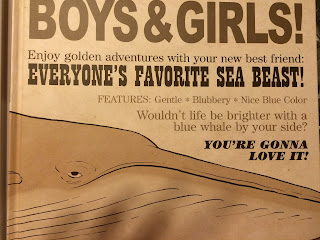 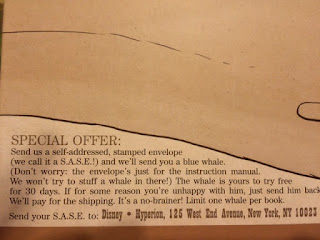 I pulled nonfiction books about whales and made copies of specific sections of the text.  The following book worked especially well because each page included a different question about the whales: 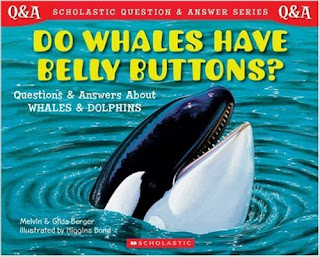 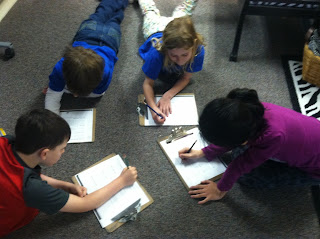 After we researched and took notes about blue whales, we wrote our letters to the publisher.  I made a big deal out of showing the kids the big envelopes that were already post-marked and ready to send as soon as our letters were finished.  If you are a classroom teacher, you could let each child write his/her own letter to the publisher.  We wrote a letter as a class. 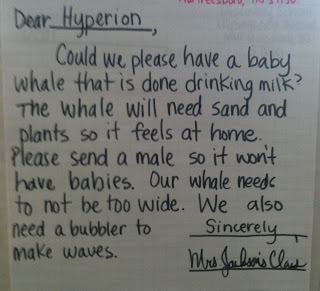 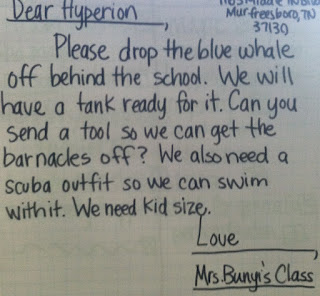 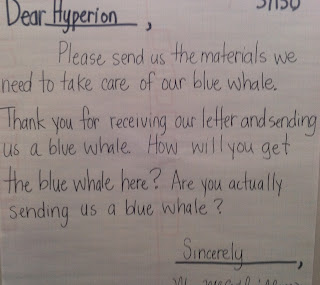 We measured areas of the school to see if we had enough room for a blue whale.  We decided a tank right outside of the library would be just enough space. (We even filled out a work order to ask our maintenance man to build the tank for us). 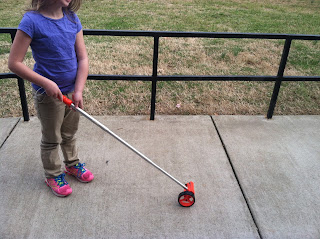 After we finished our letters, they were off to the publisher! 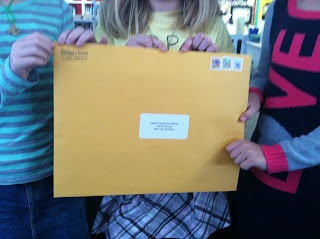 I taught this lesson with first and second graders, but I think older students would enjoy the story and the fun of not knowing what will exactly happen when they mail off those letters!  The best part of this unit was that each part of the lesson easily rolled into the next because the students were so excited to see what would happen when they mailed off their letters...

Want to know what happens when the publisher receives the letter?
Watch Mac Barnett, the author, tell you himself in this amazing Ted Talk.

And finally...the most important thing...if your students want to send letters to Hyperion, be sure to use their NEW address:

Posted by Unknown at 5:28 PM No comments: